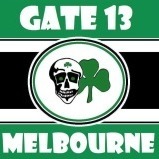 The boys cheering on Marco did an exceptional job Tsonga the m*****smeno having a little sook because we were against him all game! Been 10 years that I've been going to see Marco at the Aus open, h